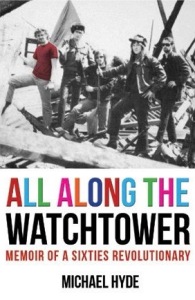 Michael Hyde spent the sixties opposing Australian and US involvement in the Vietnam War – a conflict at the heart of that turbulent decade. As opposition to the war grew exponentially, tens of thousands of young people took up the fight against it and the social ills of racism, poverty and inequality.

Michael’s personal journey from Christian pacifist to student revolutionary was as wild as the sixties itself. Trips to the Cultural Revolution in China and to Cambodia to meet the Viet Cong, breaking the law, demonstrations, arrests, living on the run, communal houses, music, drugs and sexual liberation were all part of the rollercoaster of rebellion.

The young radicals wanted to make the world a better place and they weren’t about to be deterred. This is one of the first stories of that era reported through the eyes of someone right in the thick of it, someone who lived every moment of the Sixties, someone who was there and who remembers.

Read The Revolution Revealed: An Interview With Michael Hyde, posted by Hyde Magazine on September 2, 2016.